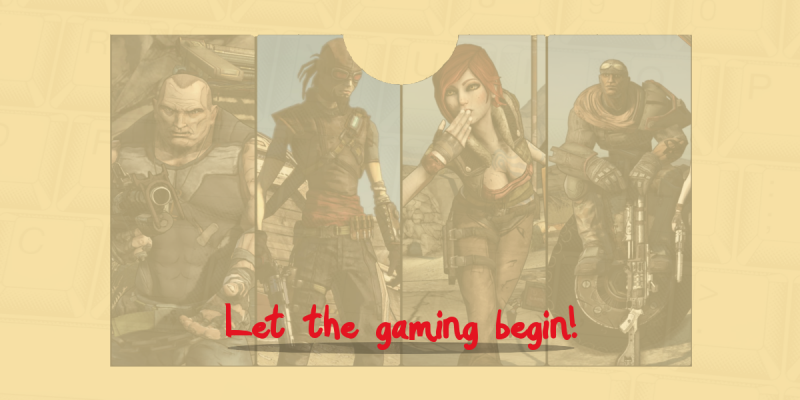 Don’t you just love it when you find a game you, your partner and your kids can enjoy together? I know that a lot of families like to gather around the table for a board game. As fun as that can be, we have found our shared passion in the PC gaming world.

These weeks it’s all about Borderlands! Now I know that not everyone agrees on allowing kids to play shooters (or games for that matter) but that’s for a whole other discussion. My two oldest are 10 and 9 years old and they have tried everything from Destiny 2 to Diablo II. They love gaming, especially when we game together. And we haven’t experienced any increase in violence from their side. The school hasn’t either….anyway, back on subject…

This lovely game was released by Gearbox Software in 2009. It is an open world action role-playing first-person shooter video game (as the wiki describes it) and the first of the Borderlands series. Borderlands is a game loved by many and despite its age, it will always remain one of those unforgettable games. My husband and I completed it once in 2015 and ever since then we thought it could be fun to have another play through but then with other characters. But as many of you know, working, studying, having kids etc., it all makes life quite busy and I guess that’s why we never got to the point of giving it another go…. at least not until now! And this time in the company of our two oldest kids!

The way we have made it work, taking school and work into consideration, is by gaming on Tuesday evenings (Wednesday is a short school day with gym for the kids) until 21 o’clock and then weekends. In the weekend we game on Friday and Saturday evenings plus after lunch on Sundays, when our youngest is napping. This way our youngest doesn’t “suffer” from lack of attention, since she is sleeping by the time we start up our computers.

My husband runs his own Mumble server (free and open-source software) which enables us to use voice communication. So, we actually sit in separate rooms, my husband in his office, me in my garage and the kids in each of their rooms, where we communicate via Mumble using headsets, microphones and headphones. The kids have had computers of their own for years now. In the beginning they only played games like Minecraft but their collection has since expanded to titles such as Ark: Survival Evolved, Guild Wars 2, Diablo II and more. My husband has for a long time had a Minecraft server up and running which we have all played on together with my nieces, my brother-in-law and my sister from Denmark. Gotta love how the internet makes such things possible!

Last year, as a 10 year birthday present, my son got a new computer and office chair. One of those red/black gamer chairs. He has been wanting one ever since he saw one alike in a YouTube video. In the computer was his very first SSD. It was really fun to see how amazed he was regarding the difference in speed between that and his HDD. We are hoping to upgrade our gamer daughter’s PC with a SSD for Christmas this year. Hopefully it will make hers equally fast. Especially at starting up! Then her HDD can be fully abused by her games. At this point she keeps having storage issues because of the enormous size of Ark. It even got so far that my husband had to uninstall it to make room for LibreOffice (another free and open-source software)… Yeah, it was that bad!

I really hope that this hobby of ours will be equally fun for our youngest, when she gets old enough. The fun we have and stories we share, it’s all truly epic!

...well if that's the case you should be happy to hear that it is possible to support via purchases from my RedBubble profile or donations via PayPal!

The Woman Behind Charmingly Epic

Hey everyone and welcome to my little blog. My name is Tina, am from 1983 and living in the Netherlands with my Dutch husband and our three kids. I was born and raised in Denmark but have been living here in the land of bikes, tulips, mills and flatness since the year of 2007.

I am a housewife who loves to game. Especially when it is together with my husband and our kids! Otherwise I do what I can to help around the house and the kids. At the same time I am at a constant battle against Multiple Sclerosis and Fibromyalgia. I have been suffering from Fibro for at least 10+ years and I got diagnosed with MS in March 2018. How long I have had it, the doctors can’t say.

My goal with this blog is to share my stories throughout my life. My experience. I hope you decide to stay and have a look around! Remember, feel free to leave a comment!